MORE2 was created in 2004 as a social justice organization representing different faith traditions, cultural backgrounds, races, and economic means. The organization included twelve congregations and has now grown to thirty-two congregations and many individual members. We are united in our commitment to transforming our communities, building a Kansas City area that embraces all people and offers everyone the opportunity to achieve their greatest potential.

As people of faith, we are called to break down barriers that divide us by race and class. Rather than providing services or programs, we work to change policies through grassroots movements, in ways that promote racial and economic equity in Kansas and Missouri.

We are affiliated with the Gamaliel Network, which includes 45 affiliates in 17 states. Truly grassroots, the members of MORE2 and the other affiliates work together to set the national priorities agenda for Gamaliel and come together multiple times a year for training and development.

MORE2 is led by a board of directors comprised of representatives from our member organizations. Our executive board is as follows: Lora McDonald is the Executive Director of MORE2. She lives in Kansas City with her son. McDonald earned a Bachelor’s Degree in Social Work from the University of Missouri. In her twenty-five year career as a social worker, she has served a variety of populations: people in drug treatment; incarcerated individuals; homeless youth; foster and adoptive families; and people living in poverty. Her primary focus has always been challenging the policies, systems, and programs that hinder the lives of individuals and families.

In 2012, McDonald became the Executive Director of MORE2. Under her leadership, the organization has ensured the passage of over a dozen public policies in the areas of workforce, criminal justice, transit, and immigration; stopped the decimation of Kansas City Public Schools; won the Healthy Homes ballot initiative for rental housing inspections; and offered tools to thousands of community members to understand and address racial inequities in their communities.

McDonald has been honored by the Missouri Legislative Black Caucus with a Community Advocate award; recognized by Proclamation from the City of Kansas City; earned the “Equality 1st Award” from the Adult Prom Committee (Kansas City, KS); and the Social Work Macro Practitioner of the Year Award from from ACOSA. Marcus Winn is the Lead Organizer for Integrated Voter Engagement. Marcus earned a Bachelor’s degree in Political Science and Philosophy from Olivet Nazarene University and a Master’s Degree in Theology from Catholic Theological Union. Marcus worked in nonprofit direct service and higher education before organizing. Marcus began organizing with neighbors while living in Chicago, working on a variety of issues such as affordable housing, immigration, and education. He co-founded an independent precinct organization in 2015 that continues to successfully pursue more democratic processes for local decision making and amplify the voices of local leaders. He moved to Kansas City in 2017, and joined MORE2 in early 2018, with a focus on voter engagement in Kansas. Gary Enrique Bradley-Lopez is the Missouri Community Organizer working around health equity issues. Gary earned his Associates of Arts in Theatre at Kansas City Kansas Community College, Bachelors of Arts in Communication: Journalism and Mass Communication at the University of Missouri-Kansas City, and is obtaining his Masters of Professional Studies in Organizational Leadership from Fort Hays State University. While this is Gary first time organizing he has a bit of experience on working on campaigns due to volunteering for multiple local races, serving on leadership roles on many political organizations, and running for office in 2019. He has worked in the non-profit, education, and higher education before becoming an organizer. Gary is born and raised in Kansas City, Kansas and has spent his whole life in the metro, he is looking forward to this time to learn, mobilize, and assist leaders to create a more equitable Kansas City. 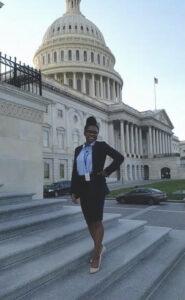 India Woods began working with MORE2 as a Community Organizer in January of 2021. As a native of Kansas City, India experienced and observed others live through the effects of poverty and systemic injustices almost every day. India became engaged with MORE2 after graduating from high school, as an intern, where her passion to serve grew stronger. As a result, India went on to pursue a degree in Social work at the University of Missouri, in hopes of continuing her community work after graduation. While pursuing her degree, India worked with and mentored children in the Columbia, MO area, served as an intern for Congressman Emanual Cleaver II through the Congressional Black Caucus Foundation in Washington, D.C, created Social Justice events for the Gaines/ Oldham Black Culture Center, and advocated for victims of Sexual Assault on college campuses. After graduating from the University of Missouri, India began working as a Case Manager for youth in the Foster Care System, then a Community Resource Advocate for victims and families of victims of violence. While working with these populations, it became evident that changes at the macro-level needed to occur, for the services provided to foster youth and those affected by violence to be effective. Therefore, in efforts to continue making macro-level community changes, India began working with MORE2 in hopes of making changes for her community, as well as empowering youth and minority leaders to become engaged in the changes they hope to see in their communities.